History of Tae Kwon Do

Tae Kwon Do is an ancient form of unarmed combat practiced for many centuries in Korea. It became perfected in its present form by Major General Choi Hong Hi (1918 – 2002), and has been scientifically developed and modernised since its introduction to the world on 11th April 1955.

Translated from Korean, Tae means to jump, kick or smash with the foot, Kwon means to punch, strike or destroy with the hand and Do is art, method or way.

Tae Kwon Do was introduced to Great Britain in 1967 by Rhee Ki Ha.

The Tae Kwon Do Association of Great Britain (TAGB) is a nationally recognised Tae Kwon Do organisation.

It was formed in 1983 and has since become the founding member of the British Tae Kwon Do Council (BTC) which is recognised by the United Kingdom Sports Council. 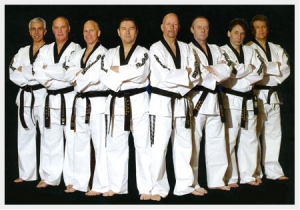 TAGB instructors are highly qualified, accredited individuals with many years’ experience in teaching mixed classes which often include young children and disability groups.

Training in Tae Kwon Do can start at any age.

TAGB members start as young as five and recently one of our members gained his fifth dan black belt on his 70th birthday!

Because of its high-kicking, fast-paced style Tae Kwon Do is a thoroughly modern way of getting fit.

The TAGB is a great advocate of fun and fitness at an early age and TAGB instructors often work with local schools to teach self-defence.

As the largest martial arts organisation in the world the TAGB has over 25,000 accredited members, 600 schools, and organises seminars with World Masters, demonstrations, and national, regional and international championships every month of the year.

The TAGB is not just concerned with its own development, this is why it has played a leading role in the reunification of British Tae Kwon Do into one body. In 1988, the TAGB helped found the British Tae Kwon Do Council (BTC), this being the only governing body of Tae Kwon Do to be recognised by the Sports Council.

The TAGB also helped found Tae Kwon Do International (TKDI), the object of which is to bring together Tae Kwon Do practioners throughout the World.

Tae Kwon Do International is non-political and it doesn’t attempt to dictate to member countries how they must run their affairs.

Since its foundation in 1993, Tae Kwon Do International has grown to become one of the biggest World Tae Kwon Do bodies.

Its World Championships are amongst the largest and best organised and it draws its participation from every contingent.

Tae Kwon Do training is about learning to discipline your mind as well as your body and TAGB instructors always include elements in their teaching which help their students to develop mentally as well as physically.

With schools throughout the country the TAGB is the ideal organisation for learning a martial art that has evolved through a 3,000 year history to become the newest Olympic Sport.

Sutton Coldfield Tae Kwon Do was established in 1984 by Mr Ron Sergiew 3rd Dan, founder member of the TAGB, former World and European fighting champion as well as the demonstration flying side kick gold medal winner.

The club is currently located at Sutton Coldfield Girls School, Jockey Road, B73 5PT on a Tuesday and Sunday in brand new facilities.

After many years of teaching and building the club, Mr Sergiew moved up the ranks to become a World Master 8th Degree Black Belt, Treasurer of the TAGB, Committee Member of the British Tae Kwon Do Council (BTC) and Tae Kwon Do International (TKDI), and Black Belt and Colour Belt Grading Examiner. He is also involved in the development of the organisation with some of the biggest tournaments, World Championships and seminars that have made the TAGB one of the biggest single Tae Kwon Do associations in the world today.

Due to these commitments, in 2004 Master Sergiew passed the club on to Mr Terry Read, 4th Dan. Mr Read had been building TAGB Tae Kwon Do in the South East area and was running clubs in Hemel Hempstead and St Albans with close friends from Master Sergiew’s club, Mr Miles Lutwyche and Mr James McKenna. Mr Lutwyche opened clubs in both Luton and Dunstable and Mr McKenna opened clubs in Colchester and Chelmsford. Between them they helped instructors branch out with over 30 TAGB clubs around that area. All three are now Master 6th Degree Black Belts and have trained together for 27 years. Mr Lutwyche is still teaching and inspiring instructors in the south east area, whilst Mr Read and Mr McKenna have come back to their roots to carry on building TAGB Tae Kwon Do in Sutton Coldfield.

Over the years Sutton club has had many World Champions in all aspects of Tae Kwon Do. Stuntman and world famous actor Scott Adkins started his martial arts journey with Tae Kwon Do because of its dynamic kicking. Scott was around 13 when he joined the Sutton Coldfield TAGB club and knew then that he was going to become a martial arts film star. Mr Read, Mr McKenna and Mr Lutwyche had the pleasure of training with Scott for four years before he moved on. It shows you if you have the discipline and the belief you can reach your goals. Check out TAGB and Scott Adkins on YouTube. See you soon hopefully.

Tenets of Tae Kwon Do

Courtesy
To be polite to your instructors, seniors and fellow students

Integrity
To be honest with yourself. You must be able to define right from wrong

Perseverance
To achieve a goal, whether it is a higher grade or any technique, you must not stop trying; you must persevere

Self-Control
To lose your temper when performing techniques against an opponent can be very dangerous and shows lack of control. To be able to live, work and train within your capability shows good self control

Indomitable Spirit
To show courage; when you and your principles are pitted against overwhelming odds